Following the consultation on the Notice of Proposed Amendment for small Unmanned Air Vehicles (UAVs), weighing 25 kg or less and operated within visual line-of-sight, Transport Canada has been finalizing the policy and regulatory framework.

The Department is currently developing proposed regulations that are expected to be made public in the Canada Gazette, Part I in spring 2017.   Inspectors will have the opportunity to provide comments as part of the consultation period, and as a Stakeholder in the regulation review process OntarioACHI will again be commenting on these new regulations.

The formal commenting period starts when the regulations are published in the Canada Gazette.  The link to the current consultations is here.

Adjustments are made as required based on the comments received and the regulations are then published in the Canada Gazette, Part II and considered final. A transition period is normally provided prior to the coming into force of a new regulation.

Until the new regulations are accepted and in place At this time, the regulatory exemptions (exemption for under 2 kg / exemption for 2 kg to 25 kg) remain valid and will be updated prior to their current expiry date of December 16, 2016. For those that cannot meet the conditions of the exemptions, until such time as the final regulations are published, you can apply for a Special Flight Operations Certificate.

Highlight of the new proposals

Here are some highlights of the updated proposed policy and regulatory framework based on feedback received from stakeholders on the Notice of Proposed Amendment, industry growth, risk analysis and, where possible, discussions with international partners.

Transport Canada have asked us to reiterate that these are only proposed changes and are not yet currently in place. The formal consultation period along with the actual text of the proposed regulations will be communicated to OntarioACHI as a Stakeholder for consultation when ready and published in the Canada Gazette, Part I, in spring 2017.

We will of course pass this information along to our members. 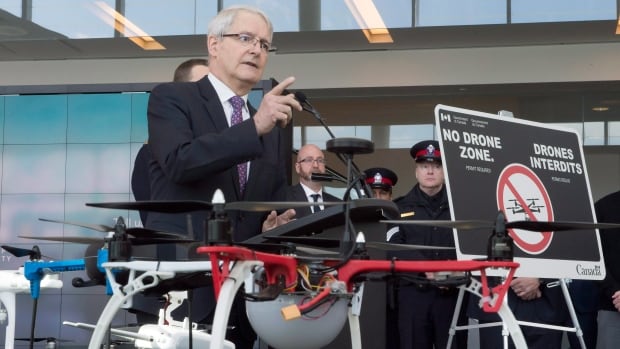 Transportation Minister Marc Garneau used his authority as Transport Minister to make an Interim Order, pursuant to subsection 6.41(1) of the Aeronautics Act , to severely restrict the recreational use of drones. The new restrictions which came into effect immediately upon announcement (13th March 2017) have a number of prohibitions.

The rules do not effect commercial users of drones (UAVs) who still need to fully comply with Special Flight Operations Certificate rulings.

If you fly your drone for fun and it weighs more than 250 g and up to 35 kg, you do not need special permission from Transport Canada to fly.

You are restricted from flying your drone:

In addition, your name, address, and telephone number MUST be clearly marked on your drone.

If you fly where you are not allowed or choose not to follow any of the rules above, you face fines of up to $3,000 if you are an individual, and if you are flying and the drone is in anyway associated with a corporate entity up to $15,000

As a not-for-profit Association we rely heaviliy on support from our members and friends.  These are just a few who help us keep the lights on.

DO NOT USE THE JOIN NOW BUTTON IF YOU ARE ALREADY A MEMBER OR REGISTRANT!

NOT A MEMBER AND WANT TO JOIN? CLICK THE JOIN NOW BUTTON

Not getting the newsletter?

Because we can't guarantee where you may be browsing from, this site requires approval from you with regard to cookies to comply withthe GDPR and CCPA privacy guidelines.

We use cookies on our website to give you the most relevant experience by remembering your preferences and repeat visits. By clicking “Accept All”, you consent to the use of ALL the cookies. However, you may visit "Cookie Settings" to provide a controlled consent.
Cookie SettingsAccept All
Manage consent

This website uses cookies to improve your experience while you navigate through the website. Out of these, the cookies that are categorized as necessary are stored on your browser as they are essential for the working of basic functionalities of the website. We also use third-party cookies that help us analyze and understand how you use this website. These cookies will be stored in your browser only with your consent. You also have the option to opt-out of these cookies. But opting out of some of these cookies may affect your browsing experience.
Necessary Always Enabled
Necessary cookies are absolutely essential for the website to function properly. These cookies ensure basic functionalities and security features of the website, anonymously.
Functional
Functional cookies help to perform certain functionalities like sharing the content of the website on social media platforms, collect feedbacks, and other third-party features.
Performance
Performance cookies are used to understand and analyze the key performance indexes of the website which helps in delivering a better user experience for the visitors.
Analytics
Analytical cookies are used to understand how visitors interact with the website. These cookies help provide information on metrics the number of visitors, bounce rate, traffic source, etc.
Advertisement
Advertisement cookies are used to provide visitors with relevant ads and marketing campaigns. These cookies track visitors across websites and collect information to provide customized ads.
Others
Other uncategorized cookies are those that are being analyzed and have not been classified into a category as yet.
SAVE & ACCEPT